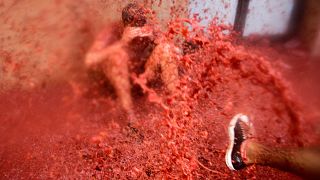 Over 20,000 revelers hurled 150,000 kilos of ripe tomatoes at each other in the ‘Tomatina’ festival held every year on the third Wednesday of August in the Spanish town of Buñol, 38 kilometres west of Valencia.

The massive food fight traditionally kicks off only after some participants climb up the “palo jabon” (soapy pole) to reach a leg of ham.

If you were at Bunol´s #Tomatina2016 festival, then try an icepack on those poor bruises of yours! Hope you had fun! pic.twitter.com/Fug5ioX8Fk

The ‘Tomatina’ fight supposedly originates from a spontaneous bust-up amongst villagers in 1945. It was banned for a time during the 1950s at the height of General Francisco Franco’s dictatorship, but has gained popularity since it was re-instated drawing a huge international crowd.

Other theories as to the beginnings of the tradition range from a juvenile class war between locals and visitors from Madrid to an accidental truck spillage.

The fight itself generally lasts for an hour, after which the town undergoes an extensive clean up operation aided by the fire department, who bring out hoses to clean the streets.

The village’s cobblestone streets are completely spotless after the ‘Tomatina’, because of the acidity of the tomato which disinfects and thoroughly cleans the surfaces.

The city council has a short list of rules for those attending the festival.

Tomatoes must be squashed before they are thrown to avoid injury; no other projectiles are allowed; participants must make way for trucks and lorries; and after the fight is over, no tomatoes are to be thrown.