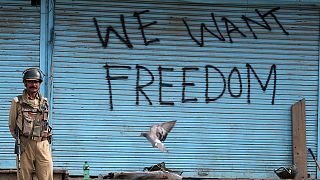 Protesters and supporters of Kashmiri separatist groups in Indian-controlled Kashmir have marched on the United Nation’s office in Srinagar, demanding the UN intervene in the Kashmir dispute.

The contested Himalayan region has been extremely tense for almost six weeks since government troops shot and killed a rebel leader there.

Kashmir is divided between India and Pakistan and claimed in its entirety by both.