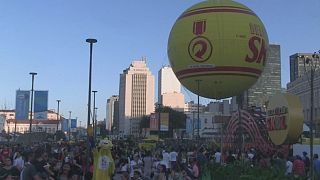 The Olympic Boulevard of Rio

Updated: 16/08/2016
<p>One of the massive successes of <span class="caps">RIO</span> 2016 has been the Olympic Boulevard, in the rejuvenated port district, which boasts an Olympic flame, live music on three stages, a hot air balloon, bungee jumping, food trucks and a number of big screens showing the Olympics. </p> <p>The Olympic Boulevard is to be one of the key legacies for <span class="caps">RIO</span> 2016 as it is located in the newly developed port area, called Porto Maravilha, which had fallen into ruin in recent years.</p> <p>There are many attractions on Olympic Boulevard, but one in particular has stood out this week. A model of the city of Rio de Janeiro, made of nearly one million Lego bricks, has been a big hit with the public.</p>
no comment