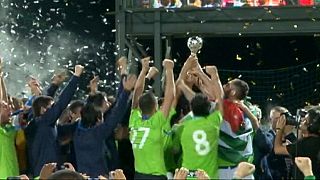 Hosts Abkhazia won the alternative football World Cup for various unrecognised entities in Sukhumi, the capital of the Georgian breakaway region. National pride and identity were at the forefront of the tournament for unrecognised states called the ConIFA World Football Cup – a competition organised by the Confederation of Independent Football Associations which represents ‘national’ sides unable to join FIFA. Abkhazia beat Punjab 6-5 in a penalty shoot-out after the teams drew 1-1.