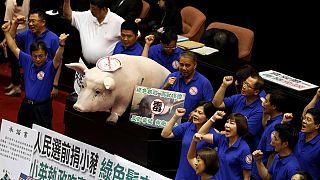 Taiwan’s new premier Lin Chuan failed to give his first administrative report to parliament on Tuesday morning, as members of the opposition Nationalist Party, or Kuomintang (KMT), took to the stage of the main parliamentary hall, while protesters clashed outside the building.

KMT MPs brought a large Styrofoam pig and pictures of Sun Yat-sen, the founder of modern China,
as well as the flag of the Republic of China (Taiwan’s official name) to protest in parliament over US pork imports, saying that they will continue to block premier Lin from the podium.