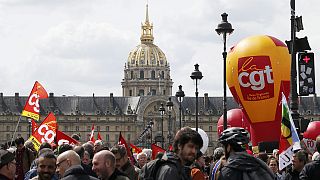 Protest against labour reform in France

Updated: 04/05/2016
<p>Thousands of people gathered on the Esplanade des Invalides in central Paris on Tuesday to call on lawmakers to vote against the Government’s controversial reform of France’s labour laws. Several trade-union leaders and musicians took to the stage during the two-hour protest, a few hundred metres away from the National Assembly where the draft bill was being discussed for the first time.</p>
no comment