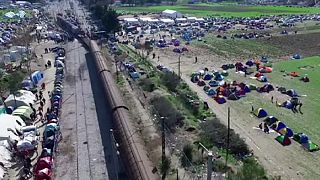 Updated: 06/03/2016
<p>Migrants block a railway track running through the Idomeni refugee camp in northern Greece. </p> <p>The group lay down on the Greek side of the track, preventing a freight train that had just crossed from the Former Yugoslav Republic of Macedonia. More than 13,000 people are estimated to be stranded at the border.</p>
no comment