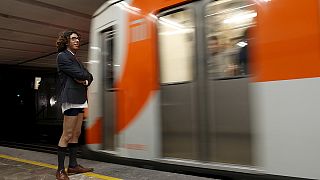 For a sixth year running commuters in Mexico City showed off their underwear by taking part in the annual “No Pants Subway Ride.” The multi-city event began in New York as a stunt in 2002 and is now celebrated worldwide to the consternation of commuters everywhere. Male and female participants in their underwear traveled alongside fully-dressed passengers. Organisers call it “an international celebration of silliness.”