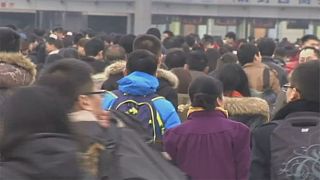 The world’s biggest mass human migration is ongoing as Beijing residents rush to catch a train home to toast the Lunar New Year with their families.

The migration, which surrounds the week-long new year holiday, began on January 24 and is expected to last until March 3.

The estimated total volume of passengers is expected to reach more than 2.91 billion, according to the National Development and Reform Commission (NDRC), China’s top economic planner.