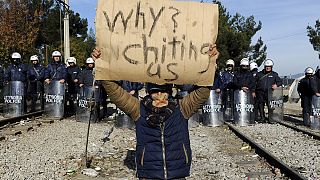 Human rights group Amnesty International called on F.Y.R.O.M to stop what it called its discriminatory policy at the border because it was fuelling tensions.

It said it was alarmed by reports of FYR.Macedonian police officers firing rubber bullets at asylum-seekers and urged them to show restraint. The United Nations refugee agency, UNHCR, said Greece ought to restore security as a priority.