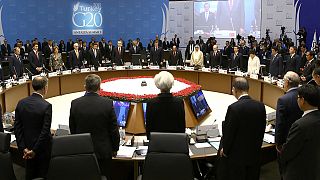 Updated: 16/11/2015
<p>World leaders have begun meeting in Turkey to discuss the effect of the refugee crisis on European security after terrorist attacks in Paris left 129 dead and several hundred injured.</p> <p>The self-styled Islamic State group claimed responsibility for a string of coordinated gun attacks and suicide bombings in the French capital on Friday. Seven extremists opened fire on restaurants, bars and a concert hall, and detonated suicide vests near the Stade de France in the deadliest attack on European soil in more than a decade.</p>
no comment