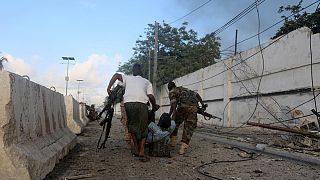 Updated: 02/11/2015
<p>Security forces in the Somali capital Mogadishu fought for several hours on Sunday before clearing a hotel of Islamist al Shabaab gunmen. Two bombs ripped through the building before militants stormed it, according to police and witnesses. At least 13 people are reported to have died.</p>
no comment