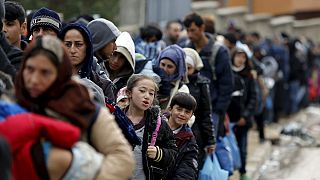 Around 1,000 migrants and refugees crossed the Slovenia-Croatia border on foot at dawn on Saturday (October 24), near the village of Rigonce. Held initially in an open field exposed to wind and cold, they were herded into columns by mounted police and led six kilometres on foot down a country road to a registration centre.

Slovenia, the size of Canada’s Lake Ontario, is only a way station for the asylum seekers, as almost all of the more than 680,000 to have reached Europe this year want new lives in wealthier western EU states like Germany.

European leaders are due to meet in Brussels on Sunday to discuss the latest developments in the migrant crisis, Europe’s biggest since World War.