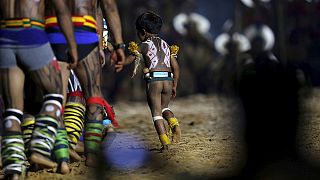 A rocky start of the first World Indigenous Games

The first World Indigenous Games got off to a rocky start on Friday as the opening ceremony’s colourful parade of indigenous peoples was marred by technical hitches and a noisy protest against the Brazilian government.
The ceremony was orchestrated by a producer who is helping to plan the opening ceremony for next year’s Olympic Games in Rio de Janeiro, and included a parade of people in native dress ranging from tropical-friendly straw skirts and feathers to Artic furs.

Billed as the indigenous peoples’ answer to the Olympics, the nine-day World Indigenous Games has drawn around 2,000 native people from dozens of Brazilian tribes and nearly 20 countries to Brazil.

Brazilian President Dilma Rousseff, who attended the ceremony in Palmas, was initially greeted by boos and hisses. Several groups of indigenous spectators unfurled protest banners and broke into anti-government chants.
Rousseff, who has seen her popularity ratings plummet to single digits amid a tanking economy and unfurling corruption scandal at state-run oil giant Petrobras, has long had frosty relations with Brazil’s indigenous communities. They regard her as too friendly with big agriculture and slow to designate indigenous territories.

Jaan Roose has frequently slacklined where nobody has ever slacklined before and his latest thriller in the sky is one of the most mind-bending yet.