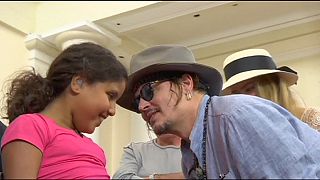 Johnny Depp on hand to help Rio's hard of hearing

Film star Johnny Depp was among celebrities who helped the hard of hearing in Brazil.

Depp joined the likes of Alice Cooper and Joe Perry to turn on customized hearing devices for people in Rio de Janeiro – some of whom had lived in silence for most of their lives.

Depp, who was accompanied by his wife actress Amber Heard, described the experience as ‘moving’.