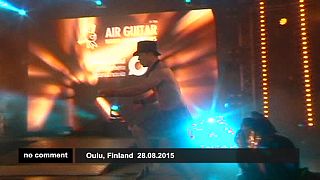 Kereel “Your Daddy” Blumenkrants has been crowned the first-ever Russian Air Guitar World Champion in Oulu, Finland at the 20th anniversary of the event, which promotes world peace. The competition was extremely tight and it came down to a thrilling 3rd-round Air Off between “Your Daddy” and Matt “Airistotle” Burns from the United States. The two also happen to be friends from opposite ends of the world who met each other through the annual worldwide competition, illustrating the message of brotherhood that the Air Guitar World Championships has spread for 20 years