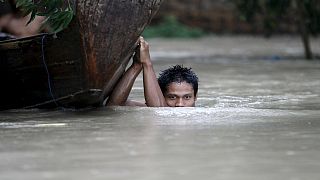 Residents in southern Myanmar are being urged to leave the region as flood water in Ayeyarwady delta rises to a dangerous new level.

The widespread floods that were triggered last week by heavy monsoon rains have killed 81 people, according to Ministry of Social Welfare, Relief and Resettlement.

About 6.2 million people, 12 percent of Myanmar’s population, live in the region, a southwest area where the Ayeyarwady and other rivers branch out into a delta leading to the sea.

Yangon, Myanmar’s largest city, has not experienced flooding, despite being near the delta .
Country-wide, the impact on agriculture has been far greater.

According to the ministry, 1.17 million acres of paddy field have been flooded, with 152,500 acres destroyed.