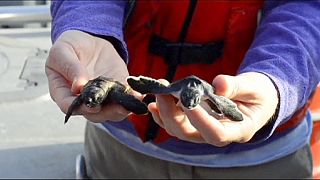 The US Coast Guard has helped 25 baby sea turtles return to their natural habitat. They took them 64 kilometers off the coast of Cape Canaveral, Florida, before letting them loose. The group, which included Loggerhead and Green sea turtles, had originally been found in nests along the shoreline, unable to crawl back into the ocean, according to local media. They were taken in by a zoo, to avoid them being attacked by predators.