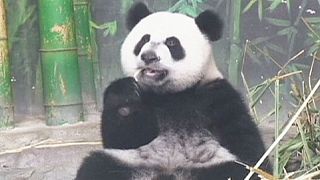 The world’s only surviving giant panda triplets celebrated their first birthday at the Guangzhou Chimelong Safari Park in south China’s Guangdong Province. The trio, named Meng Meng, Shuai Shuai and Ku Ku, have grown from small cubs weighing some 100 grams to plump creatures scaling over 30 kilograms with average body lengths of one metre. Their habits have undergone changes as well. Pandas are known for having very low survival rates. The triplets are extremely rare, of which only four cases have been recorded.