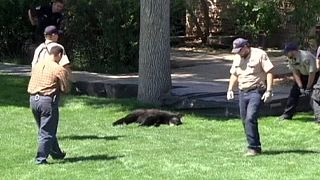 A bear that climbed a tree on a university campus in Colorado fell to the ground on Friday after being shot with a tranquilliser gun.

Wildlife officials said the two-year-old bear was in the tree for about four hours before they decided to tranquillise it.

Crews pushed mats under the tree to help cushion the bear’s fall.But when it slid down, it hit the edge of a mat and bounced to the hard ground instead.

The bear could be seen moving and breathing after the fall.Officials say it will soon be relocated away from the campus.