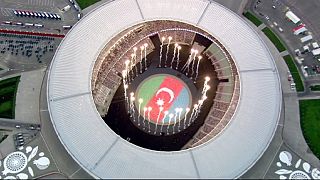 European games kick off in Baku

A spectacular ceremony in Baku launched the inaugural European Games in which 6,000 competitors from 50 nations will take part. In a two-hour curtain-raiser produced by Dimitris Papaioannou, who was in charge of the Athens 2004 Olympic ceremonies, the history of the nation on the shores of the Caspian sea unfurled in a kaleidoscope of colours and sounds.