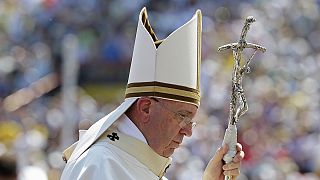 Pope Francis has arrived in his first visit to Bosnia and Herzegovina this morning with more than 65.000 believers expected to attend the holy mass Pope Francis will lead at the Sarajevo Kosevo stadium.

The largest number of believers comes from Bosnia and Herzegovina and Croatia, but also from Croatian Catholic missions in Austria, Germany, Switzerland, Macedonia, Bulgaria and Egypt. The program at the stadium begun with the arrival of the Holy Father by the popemobile from which he greeted the gathered mass. After that the Mayor of Sarajevo Ivo Komsic will hand him the Key of the City and Charter on Awarding the Key to the City. The award consists of a box with a key and the Charter text in Bosnian and Italian. In the top of the Charter the Visegrad Gate is embossed, a symbol of entry into the city.

This is the third visit of the head of the Roman Catholic Church to Bosnia and Herzegovina who will convey a message of peace and the need for co-existence in the region.