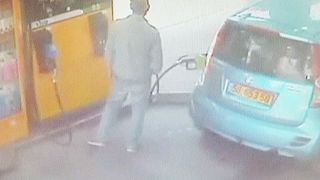 Israeli police arrested a woman suspected of setting a pump on fire at a petroleum station in Jerusalem. According to a police officer, after being refused a cigarette a woman pulled out a lighter from her pocket and ignited the petrol pump. The driver’s brother was sitting inside the car set ablaze, reported local media. No one was reported injured.