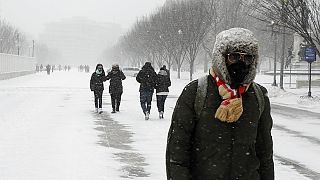 Freezing weather in the US

Millions of people in the east of the United States awoke to chilling temperatures, cold enough to break records in both Washington and New York.

In Kentucky, at least four people have died as a result of the freezing weather, while two people near to Pennsylvania are said to have frozen to death.