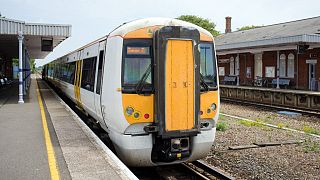 UK rail workers have just kicked off a month of strikes today over pay and conditions. The industrial action is causing travel chaos for passengers already blighted by snow disruption.

According to the UK’s biggest rail union, the RMT, 40,000 of its members across the country are striking after voting by 64 per cent to reject Network Rail’s latest offer, labelled “substandard” by RMT general secretary Mick Lynch.

This means that strike action will go ahead from this week until 8 January 2023 for both Network Rail and the 14 train operating companies under the UK's Department for Transport (DfT).

According to the RMT, “The Network Rail offer included a 5 per cent and 4 per cent pay rise over a two-year period with thousands of job losses, 50 per cent cut in scheduled maintenance tasks and a 30 per cent increase in unsocial hours.”

In a statement, the union continues, “Our members, along with the entire trade union movement will continue their campaign for a square deal for workers, decent pay increases and good working conditions.”

When are the UK train strikes this month?

Strikes will go ahead on Friday 16 and Saturday 17 December, as well as Tuesday 3, Wednesday 4, Thursday 5, Friday 6 and Saturday 7 January.

Train services will be significantly reduced on these dates. If you plan to travel, you should check your first and last available trains before leaving. On the days following the strikes, expect continued disruption in the mornings, with trains resuming later than normal.

From 6 pm on Christmas Eve until Tuesday 27 December, additional strikes are planned on Network Rail only, specifically targeting engineering works.

Which trains are still running during UK rail strikes?

On 16 and 17 December, most train operators are advising customers to avoid railways and only travel if absolutely necessary. The cities where services are worst affected include Swansea, Aberdeen, Lincoln, Canterbury, Portsmouth and Inverness.

But there are still trains running with around 20 per cent of normal UK services operational. Some key services from main rail operators are expected to run from around 7:30 am to 6:30 pm on strike days.

These are some of the routes scheduled to run but make sure you check before travelling.

What trains are running from London Paddington?

Great Western Railway (GWR) is operating hourly trains from London Paddington to Bristol Temple Meads. Some Bristol services are also being extended to Taunton, Exeter and Plymouth. Trains to Oxford and Reading are also running on a reduced schedule.

GWR sleeper services have been cancelled on strike days.

The Elizabeth line is also operating limited hours and separate train services between Liverpool Street and Shenfield, Paddington and Heathrow, Paddington and Abbey Wood and Paddington and Reading. The operator is advising passengers to expect queues of up to 30 minutes at some stations.

What trains are running from London Euston?

Avanti West Coast will be running one train an hour from London Euston to Manchester, Liverpool, Birmingham and Preston. There will be a limited service continuing on to Glasgow. The first train will depart at 8:30am and the last around mid-afternoon.

What trains are running from London King's Cross?

What trains are running to UK airports?

Some airport services are also still running too. There are half-hourly services via Southern Rail from London Victoria and London Bridge to Brighton via Gatwick Airport. Thameslink will also have trains at least every half hour from London St Pancras to Luton airport.

Greater Anglia has two trains an hour scheduled between London Liverpool Street and Stansted Airport with services beginning after 7:30 am and ending before 6 pm.

The London Underground will also be mainly unaffected by strikes except for the southwestern parts of the District line to Richmond and Wimbledon where there are reduced hours. This means the Underground may be the best way to reach Heathrow Airport.

The Gatwick Express service will not be running.