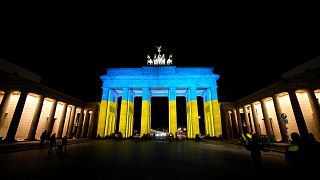 Berlin’s Brandenburg Gate displayed the yellow and blue colours of Ukraine in an act of solidarity   -   Copyright  AP Photo
By Ben Anthony Horton  with AP  •  Updated: 24/02/2022

European monuments lit up in the colours of the Ukrainian flag on Wednesday, in response to growing fears of a Russian invasion.

Both Paris’ City Hall and Berlin’s Brandenburg Gate displayed the yellow and blue colours in an act of solidarity with the besieged nation.

In the German capital, locals gathered in front of the 18th-century monument and held flags to express their sympathy for the people of Ukraine.

Ukraine has since entered a state of national emergency, declaring martial law and urging all of its citizens to leave Russia.

Watch the video above to see the act of solidarity.