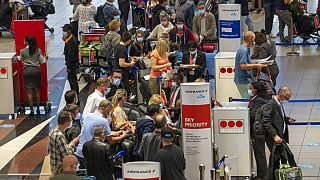 A growing number of countries have banned travel to areas affected by a new strain of the coronavirus.

However, the new variant, named Omicron, has already reached European shores. Cases have been traced in the UK, Belgium, Germany, Italy, and the Czech Republic.

"That's why I was saying that the reaction of some of the countries in terms of imposing travel bans and such measures are completely against the norms and standards as guided by the World Health Organisation," says Phaahla.

"Many of the countries which have come with this kind of draconian reaction are themselves battling with the fourth wave."

Meanwhile, sixty-one passengers who arrived in the Netherlands aboard two KLM flights from South Africa on Saturday have tested positive for COVID-19.

Dutch health officials are still conducting tests to see if these cases are the new Omicron variant, results are expected later on Sunday.

The World Health Organisation says this new mutation is a "variant of concern" and is more transmissible than the dominant Delta strain.

Travel is not the only thing that has been affected by Omicron -- the World Trade Organisation was forced to call off its MC12 summit in Geneva, just three days before the meeting.

Ministers were due to discuss the trading of medical goods and vaccine–making technology.