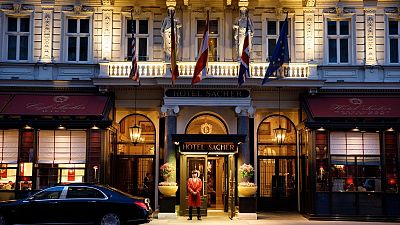 Austria’s tourism sector was plunged back into lockdown this week - for the fourth time since the pandemic began.

It’s the first country to take the drastic measure, despite spiralling COVID-19 infection rates across Europe. The hotels, restaurants, bars and cultural attractions forced to shut on Monday are unlikely to be able to reopen until 13 December - leaving just 12 days until Christmas.

From the traditional Christmas markets of Vienna, to the ski slopes of the Alps, there’s plenty of reasons why tourists flock to Austria over the festive season. Businesses were no doubt hoping the Yuletide spirit would work some magic on their finances, after a tough two years. So how are they faring now?

The luxury hotel still open for a lucky few

Inside Vienna’s historic Sacher Hotel, Christmas has already arrived. The lobby is decked out in its finery, though only a few fortunate business travellers are there to see it.

One told owner and managing director Matthias Winkler that “he feels like a king, because he has the whole building to himself”, which is quite something, given the hotel’s 152 luxury rooms.

Though he remains sanguine, Winkler says it was emotional to see an increase of guests coming to Austria - with visits approaching 70 per cent of 2019 levels - before his growing confidence was cut short by the lockdown announcement.

Practice makes perfect, however, and one thing Sacher Hotel has learnt over previous lockdowns is how to keep bringing its world-famous chocolate cake to the world.

Having observed that McDonald’s drive-thu was one of the few places open in the city last year, the concierge began selling ‘Sacher Torte’ on a little stand outside the hotel.

“We expected this to make a nice Instagram story but probably not more,” says Winkler.

“Completely wrong, people were loving it.”

This time they’re even doing home deliveries, with other Viennese specialities such as Wiener Schnitzel on the take-away menu. Some of the 16 to 18-year-old staff also had the idea to make Christmas sweets in the kitchens and sell them for charity.

“You would be surprised how much Christmas you would find,” Winkler says of the hotel’s interior.

With New Year also around the corner, they’re hoping to host a large number of guests for the renowned New Year’s Day Concert, performed by the Vienna Philharmonic just down the road. No one yet knows if it will go ahead.

A clear signal is needed from the government in the next few days, says Winkler, to stem the tide of cancellations in the city.

‘Another catastrophe’ for some businesses

Not all businesses are feeling so optimistic. One leading Viennese restaurant, whose owners did not want to be named, said “there is not much to say other than it is a catastrophe for our industry for the fourth time now.”

There’s an acknowledgement among others that while the lockdown is a blow to business, it shows that health is an important issue in Austria.

“This lockdown is epidemiologically necessary,” the Vienna Tourist Board tells Euronews Travel.

“At the same time, it means a frustrating situation for Vienna as a tourist destination, where efforts were made throughout the year to prepare for the important winter business by also taking all necessary measures according to scientific standards.

“The booking situation before Christmas this year was promising, the recovery tendencies were clearly visible.

“However, the increasing demand of the last months has proven that Vienna's international attractiveness is unbroken. We hope that international travel will be possible again from 13 December.”

Austria anti-vaxxers will be hit with €3,600 fine for refusing jab