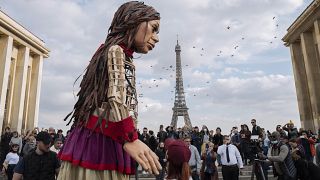 Last Friday, Little Amal - a 3.5-metre-tall puppet of a young refugee girl - met with children at an event at Place du Trocadero near the Eiffel tower in Paris, France.

‘The Walk’ is an art initiative that began in July of this year in the hopes of bringing global attention to the plight of millions of young refugees, representing all displaced children who have often been separated from their families.

The 8,000 kilometres project is travelling across Europe via Turkey, Greece, Italy, Switzerland, Germany, Belgium, and France, before ending in the UK in early November.

Throughout her journey, Amal has been welcomed by hundreds of cultural events in cities and towns across Europe, bringing together celebrated artists, major cultural institutions, community groups and humanitarian organisations.

Following her visit to the city of lights, Amal made her way to Bray-Dunes beach near Calais.

This was in preparation for the same cross-Channel journey taken by thousands of people every year seeking refuge from conflict, hunger and persecution.

Amal made her way to Bray-Dunes beach near Calais, in preparation for the same cross-Channel journey taken by thousands of people every year.

Over the next two weeks, ‘The Walk’ will embark on its final leg, travelling from Kent in the south of England, up to the northern city of Manchester.

Led by Artistic Director Amir Nizar Zuabi, ‘The Walk’ is “a cultural odyssey transcending borders, politics and language to tell a new story of shared humanity – and to ensure the world doesn’t forget the millions of displaced children, each with their own story, who are more vulnerable than ever during the global pandemic.”

The Little Amal puppet was designed by the Handspring Puppet Company, known for its award-winning design of the puppets of the long-running West End play, War Horse.

Amal’s journey has been an extraordinary artistic endeavour, which has sparked conversations about migration and offered a sense of humanity for the thousands of displaced young people trying to find their way in Europe.

‘The Walk’, which began in late July, has seen Amal walk from Gaziantep, on the Turkish-Syrian border, across Europe and it will culminate in a public event in Manchester on November 3.