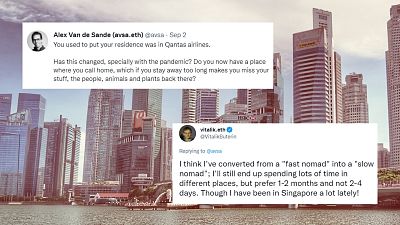 As more people ditch the office, interest in how to become a digital nomad is growing.

Working remotely from another country is definitely appealing but leaving behind your 9 to 5 life can be overwhelming. So who better to ask about making the move than an eternal digital nomad, Vitalik Buterin?

Buterin is the co-founder of Ethereum, a cryptocurrency invented in 2013, and the world’s youngest crypto billionaire. He’s well known for travelling while he works, often listing his place of residence as Qantas airlines.

Buterin opened up a Twitter AMA on Thursday, offering the 268 people he follows the chance to ask him a question. Unsurprisingly, many asked about the crypto expert’s nomadic lifestyle.

In answer to a question about how the pandemic has impacted him, Vitalik said he still doesn’t have a permanent place of residence, moving around more slowly and living in places for months at a time.

“I think I’ve converted from a ‘fast nomad’ into a ‘slow nomad,” Vitalik answered when asked about his lifestyle.

“I’ll still end up spending lots of time in different places, but prefer 1-2 months and not 2-4 days.”

I think I've converted from a "fast nomad" into a "slow nomad"; I'll still end up spending lots of time in different places, but prefer 1-2 months and not 2-4 days. Though I have been in Singapore a lot lately!

Where does Vitalik Buterin think are the best places to be a digital nomad?

When asked for his favourite places to live, Buterin answered that there were a few places on his list.

Singapore and Toronto were his favourites for “interesting culture mix and great parks”.

In another response, he said that a large chunk of time spent in Singapore last year changed him quite a bit.

“It was interesting to just… be by myself and with my own thoughts for the first time in a decade,” the tech entrepreneur wrote.

Mexico was also on the list for its friendliness, food and, perhaps most importantly for a digital nomad, a welcoming government. Buterin said that they are good at “not annoying you” about the purpose of your trip.

The hacker culture in Berlin also put it on the list of his favourite places to live.