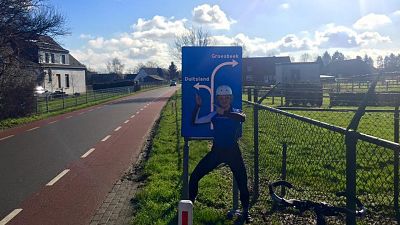 Anna McNuff's Facebook followers voted on which direction she should turn as she cycled across Europe.   -   Copyright  Anna McNuff
By Anna McNuff  •  Updated: 16/08/2021

It’s early morning on the shores of the Rhine River in West Germany and the sun is beginning to rise.

Fingers of golden light reach across the water, touching frosted branches on steep, forest-covered hills on the opposite bank. Beside me, the grey-blue waters are flowing strongly down the valley, silent and mighty, on a section of the river that’s half a mile across.

The riverside bike path ahead of me is quiet and I’m enjoying easy pedal-progress on its smooth tarmac – revelling in the rush of blood to my legs and the cool winter air whipping at my cheeks.

There are a few walkers here and there along the path. I smile as I pass but they’re gone in a flash. Just then, I spot something which causes me to bring my bike to a stop – a castle, perched like an angel on top of a Christmas tree close to the peak of a hill on the opposite bank.

It’s made from cream-coloured stone which glows amber in the dawn light and looks like something from a Disney movie.

It is intoxicating and suffocating all at once. It’s an adventure unlike any other.

I prop my bike against a stone wall at the river’s edge and sit on a nearby bench to stare at the castle, gathering my thoughts for the day ahead. Beyond the calm and quiet of a sunrise bike ride, the best and worst thing about today is that I have no idea what it will bring. And I don’t mean that in a wistful, romantic sense. I actually, truly have no idea.

I don’t know where I’ll be sleeping tonight, what town or even what country I might wake up in tomorrow. I don’t know whom I might meet or who might help me along the way.

It is intoxicating and suffocating all at once. It’s an adventure unlike any other.

When it comes to thinking about the future, there are two kinds of people in the world: planners and ‘fly by the seat of their pant-ers’. Of course, it’s not always so black and white, and most people sit somewhere on the spectrum between the two, but I’d love you to consider, for a moment, which you are.

Do you like to think ahead and form some kind of image in your mind about how things might pan out? Or are you a ‘roll with it’ kind of person, someone who wakes up each morning and goes with the flow?

I am a planner. Or rather, I am 70% planner, 30% roll with it. I’m acutely aware that the complete absence of a plan makes me uncomfortable. I’d go so far as to say that having no plan at all makes me feel wriggly in my own skin. Unsettled, anxious even.

I get especially frustrated when important plans change suddenly or, more specifically, when something I’ve been looking forward to for days, months or years suddenly disappears from view. I need time to adjust when that happens. And yet, I still love to plan.

Over the past decade I’ve planned and headed off on a number of adventures that have pushed me physically – running and cycling long distances for months on end.

But in the February of 2016, I decided that it was time for me to try something different. Instead of exploring what made me physically uncomfortable, I wondered what it might be like to do an adventure that was guaranteed to make me mentally uncomfortable. An adventure where I couldn’t plan at all.

So I decided that I would set aside a month in my diary and set out on a journey into the unknown from the back garden of my London home, armed with nothing more than a bivvy, a backpack and a devil-may-care attitude. And I would let the good people of social media tell me where to go.

Every few days I would post a voting option for the general public – which effectively boiled down to turn left, turn right or keep going straight on. Whichever direction the majority decided upon, that’s where I’d head. When the finish line gong sounded in the middle of March – wherever in the world I found myself, whatever I was doing – I’d catch a flight home.

Simples. I got down with the kids and created hashtags so that people could easily follow the journey, and I even came up with a name forthe adventure: ‘Beyond My Back Gate’. Because, beyond our back gate is the world and it’s a crying shame not to explore it at every opportunity.

Despite the lack of a plan, I did set a few parameters for the trip – rules of engagement if you will. These included things like: big flights were out but ferries were in (both for environmental and financial reasons).

The journey would need to be majority human-powered, although I was open to hitching rides from time to time. And, most importantly, I let the public know that if I ended up somewhere where there was a camel, they’d best believe that I’d be riding that noble beast as far as I could.

As if heading off on a new adventure wasn’t enough, I also decided to use the end of the trip as an opportunity to make a fresh start by moving to the West Country to be with my boyfriend, Jamie. In for a penny as they say… I was going to pack all my possessions into boxes, leave the UK as a Londoner and return as a fully-fledged country bumpkin.

Despite my belief that the move west was a step in the right direction and that ‘Beyond My Back Gate’ was one of my better adventure ideas, when departure day arrived, my mind was a jumbled mess. There was a large part of me that wanted to shut my eyes, curl up in a ball and pretend I hadn’t gone and told everyone that I was going to do this trip – or move across the country afterwards. Because, quite frankly, my London life was lovely.

It’s a life that I clung to like a snuggly blanket. I woke up each morning with a decent idea of how the day would pan out. I knew where my favourite coffee shop was. I knew how long it took to get from the flat I was renting in Brixton to Victoria Station on the tube. I knew where I’d sleep at night and that I wouldn’t have to resort to awkward sign language and smiles to have a conversation with someone who didn’t speak my language.

The thought of leaving all of that behind made me feel uncomfortable. But that was precisely the point. And I resolved that I would learn a whole lot more about the world, and myself, by moving towards that discomfort rather than away from it.

This extract is adapted from Anna McNuff's book, Bedtime Aventure Stories for Grown Ups.This collection of eight short stories from Anna's many trips around the world is available now at your favourite bookshop. Find out more about the author and her work here.