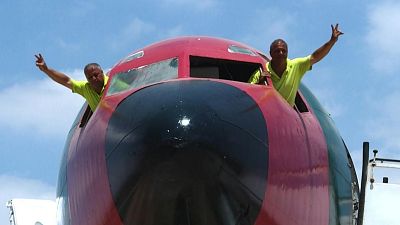 Workers are putting the final touches on a decommissioned Boeing 707 aircraft to ready it for a new kind of takeoff: as a restaurant.

Its enterprising owners, 60-year-old twin brothers Ata and Khamis al-Sairafi, expect to welcome their first customers very soon at their isolated mountain location near Nablus in the West Bank.

Inside the old jet's cabin, the seats have been stripped out and the window panes removed. Tables will soon be fitted in the fuselage, which has been painted white with laminate wooden floors.

“We do not have enough time before Eid al-Adha to complete the work, so we will start by providing fast food and hookahs,” explains one half of the duo, Khamis al-Sairafi.

"After we bought it, we had to move it from Israel ... which is a complicated process," Ata said.

They say the 13-hour transport was coordinated between the Israeli and Palestinian sides. Key roads were closed so the plane could be rolled on a giant tow truck, its wings temporarily separated, to its current location.

There was - and still is - no airport in the Palestinian Territories, so the arrival of the al-Sairafis’ plane attracted a lot of attention.

"[When we brought the plane] We entered Nablus at night, at four o'clock in the morning, the residents of Hawara village [south of Nablus] woke up and said "What's going on?! Look what's on the street." This was a historic day," explains Khamis.

Finally opening after 22 years of planning

The twins have hoped to run a restaurant out of the plane since around 2000, but the launch faltered with the outbreak of the second Palestinian intifada, or uprising.

"The events in the Palestinian territories at that time hindered the completion of our project, and we thought of reviving it two years ago, but the spread of the coronavirus also prevented us from doing so," Khamis said.

As they returned to their long-delayed passion project, the twins purchased a retired gangway from Ben Gurion Airport, its name still visible in Hebrew and English characters.

After being grounded for nearly a quarter-century they are hopeful their project will finally take off.

"Having an aircraft in the Palestinian territories," said Khamis, "is such a strange idea that I'm sure the project will be a success."