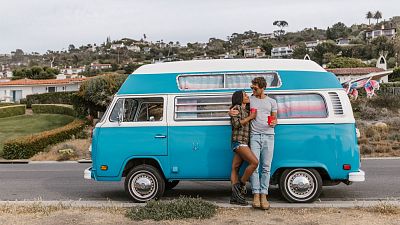 Packing your life into a van and hitting the road is now a popular choice for young and old travellers alike. It’s the social distancing dream of rolling transport, accommodation and self-sufficiency into one limitless holiday package which enables travellers to see and do more.

However, there’s no denying it comes with its challenges. For example, a new law in the UK might criminalise vanners who ‘wild camp’ due to issues with leaving behind rubbish and breaking land laws.

Another problem comes with exploring cities from the comfort of your van. Parking laws, traffic, accessibility and safety are just some of the challenges for even the most experienced vanlifers.

Here we take a look at some of the best European cities for your campervan holiday, taking into account their potential for adventure - alongside any possible pitfalls.

Getting to Girona, at Catalonia’s northeastern point, is quite the adventure in itself. The mountainous views of the Pyrenees and rolling countryside, complete with sunflower fields if you get your timing right, are a sight to behold from the driver’s seat.

The city itself is just 100km from Barcelona and is a maze of medieval fortified walls and cobbled streets. While that can make for some bumpy driving experiences, its proximity to the beach and the Pyrenees - along with an endless supply of Iberico ham - is worth it.

Year round, the city has a completely free site dedicated to campervanners. You can stop off for up to 72 hours, just enough time to get a grip on the city. For the price, we aren’t guaranteeing a 5* experience, but there’s running water, a space for rubbish disposal and it’s a 20 minute walk into town.

Italy’s built-up fashion capital might seem like an unlikely choice for Europe’s best van life cities. But its proximity to some of the country’s northern wonders including the illustrious lakes Como and Garda make it the perfect destination for road trippers.

Milan is inland but it’s only a three hour drive from Venice by van and even less to romantic Verona. You’re also right on the cusp of the Swiss Alps and a couple of hours from Mont Blanc and the French border.

In terms of the city itself, there’s endless culture to absorb. From the famous Duomo di Milano to exciting nightlife, Milan is a great stop-off for vanlifers keen to take in the Amalfi Coast - maybe stopping off at the country’s capital Rome en route.

When it comes to camping out in Milan, there are plenty of options. Campingmilano.it has a site close to the city centre which offers 130 pitches for campers and caravans. There’s an on-site restaurant, aquatic park and it’s an eco-friendly experience.

During the day, parking up in a busy city centre can seem like a daunting experience. Milan operates a ‘white zone’ system which means parking is free - and these are all over the city. There are also free parking spaces near cemeteries.

One of the smallest countries in Europe, Luxembourg’s rural landscape makes it an ideal road tripping destination. Offering the dense Ardennes forests and nature parks in the north, rocky gorges in the east and twisting Moselle river valley in the south, this is the perfect country for the outdoors type.

Luxembourg City’s medieval old town, perched atop a set of sheer cliff faces, can make for a precarious parking experience. Plus, the absolute maximum you can park for is 10 hours in ‘purple zones’ - so overnight parking isn’t banned but it is limited.

Though Luxembourg is small, it has more than 60 campsites which are well connected to the main towns. Camping Kockelscheuer is one of our favourites, just 4km outside the city centre. Free WiFi and an on-site shop complement the dedicated motorhome service station, so both you and your van can relax and recharge.

The capital of Norway needs no introduction. Located at the head of the Oslofjord - which extends to the city centre - and known for its Viking museums, green spaces and breathtaking scenery, more than half of this municipality is covered in forestland.

Oslo prides itself on being one of the fastest growing cities in Europe. It’s quickly becoming characterised by innovative architecture, Nordic cafe culture and its diverse neighbourhoods.

Amazingly, you don’t need to venture far from the city to get closer to some of Norway’s most immersive experiences. Outdoor swimming, kayaking, relaxing in one of many parks or taking a forest hike are all available right here.

The bad news for vanners? Well, it’s good news in terms of the bigger picture. The city centre is becoming increasingly car-free as part of the capital’s pledge to be as green as possible. Yes, you might not be able to drive to the main attractions. But the bees do have their own motorway, which safely transports them from Holmenkollen to Lake Nøklevann.

In better news, ample green space means there are many stunning campsites located within the city limits. Bogstad camping is Norway’s biggest campsite, literally next to the Nordmarka woods. It provides 800 pitches altogether, 300 of which are reserved for campervans. It’s just a 15 minute drive - or 30 minutes on the bus - to the city centre, and comes with its own beach on the shores of Bogstadvannet lake.

Limerick is one of Ireland’s biggest cities, resting at the estuary of the River Shannon and a gateway to the Irish coast. It’s situated close enough to one of the most famous road trip routes the country has to offer - the Ring of Kerry - but houses its own epic adventures too.

Running from the Shannon Pot to Killaloe, taking the river route will open vanners’ eyes to some of the oldest sites in Ireland. Sweat houses along the shores of Lough Allen and a stop-off at the medieval Rinn Duin will easily pass a day. It also happens to pass Sean’s Bar, the oldest in Ireland. Portumna even has its own motorhome overnight stop.

When it comes to staying in the city itself, there are plenty of 24-hour parking spots scattered around the city. On-street parking is free across the city after 5.30pm and all day Saturdays and Sundays.

The 14 most Instagrammable ski resorts in Europe revealed

Visit Monaco and live like a millionaire, even if it's just for a day

Spain is planning high-speed trains between London and Paris

These photos from the ‘Beard Olympics’ will really grow on you