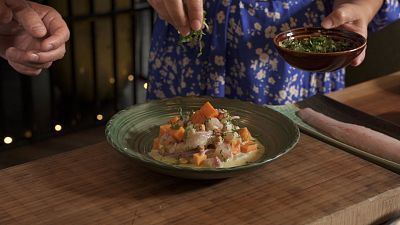 Award-winning Chef Richard Sandoval was recently in Dubai cooking in his Latino restaurant Toro Toro. This hotspot for Dubai foodies is just one of 45 restaurants around the world owned by Chef Sandoval.

The Mexican born chef is an advocate of South American food and is one of the most recognised globally for Latino food. The ceviche he prepared in the video takes its name from the central Mexican city of Huauchinago.

Although named after a Mexican city, Sandovals' ceviche uses ingredients commonly found in other parts of South America. His approach to cooking has no regard for international borders, and this dish has a heavy influence from Peruvian cuisine.

His culinary mantra of 'old ways, new hands' shines through in this recipe, where he has taken a classic dish and added his own personal touches. The result is a ceviche bursting with a citrusy, fresh flavour.

Combine all ingredients in a saucepan and bring to a simmer. Cook until sweet potato is cooked through. Remove sweet potato from liquid and reserve.

Mix all ingredients in blender and season.

Put all the ingredients in a blender, blend all till we get a nice and soft texture, check the seasoning and put in a squeeze bottle.