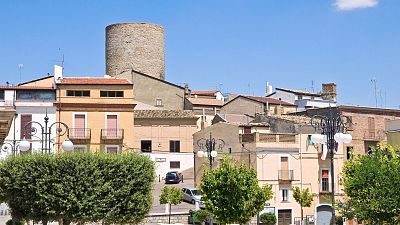 When Mayor of Biccari, Gianfilippo Mignogna, was strolling through the streets of the Italian town's historic centre, he noticed how many 'cute' homes had been shuttered for years with for-sale or for-rent signs.

It was then that he came up with the idea to sell the dilapidated houses at a price of just €1.

“Locals keep leaving and while most used to come back during the summer to visit, now they no longer do so. Many habitable houses are empty and are falling into oblivion.”

There is one small catch to the €1 dwellings. Anyone buying one must put down a guarantee of €3,000 which will be returned once the renovations are complete, possibly within three years. It seems like a reasonable price to pay to live in a picturesque Italian village.

Mignogna is offering more than just the €1 homes, too. The town is proposing to sell a whole host of unoccupied houses that are ready for you to move in. Prices start as low as €7,500 and with the most expensive property at just €13,000.

Right now, there are about 20 ready to move into dwellings available, and about a dozen €1 fixer-uppers. But there could be as many as 100 homes in need of new inhabitants in the future.

For Mignogna, the scheme is a way of attracting "new citizens (even temporary) and new investments, with job opportunities for local technicians and businesses". He says it will also benefit those "trying to lighten the tax and maintenance burden" of an old house that hasn't been used for years.

On Facebook, Mignogna wrote that they have already had more than seven thousand enquiries from people in the United States and all over Europe.

He adds that "local technicians and owners can contact me at any time, we will soon give updates."

Mignogna also writes that it's hard work "mapping out all the unused real estate heritage," in Biccari, but the two lists they are creating will be a "virtual showcase for anyone who wants to discover the big 'hidden' opportunities in a small town like ours".

Photos of the properties will soon be posted on the town of Biccari’s website and there will be updates for potential buyers on the town’s Facebook page.

Biccari, located in the province of Foggia in the southeastern region of Puglia, is an area often overlooked by tourists.

Set at the foot of Monte Cornacchia, the highest peak in the region's Daunia mountains, Biccari also straddles the borders of Molise and Campania.

Known as "the roof of Puglia", it offers rolling fields, thick forests, olive groves, and lakes. From the summit of Monte Cornacchia, views stretch to the Adriatic Coast, the Gargano Promontory, and the Tremiti Islands.

Founded by the Romans, evidence of its prehistoric past can be seen in the ruins of ancient settlements and farms dotted across its countryside.

Signs of its life as a flourishing Medieval town can also be seen in the remains of its old fortified walls and the single tower that stands at the village entrance.

Puglia itself is full of historic whitewashed hill towns and villages set in olive groves.

Located in the heel of Italy’s “boot,” it's known for its iconic white Trulli, Medieval stone dwellings with conical roofs and an amazing 800 kilometres of coastline.

The capital Bari is a vibrant port and university town, while Lecce is known as “Florence of the South” for its baroque architecture.

In the past, Puglia was referred to as the ‘breadbasket of Italy’ due to its large production of pasta and bread. More recently its the region's vibrant and fruity red wines that have gained popularity.

It's also the birthplace of many celebrated Italian foods, such as burrata cheese, orecchiette pasta, and Italy's version of paella: Tiella.

Croatia's population has dropped 10% in a decade, reveals census