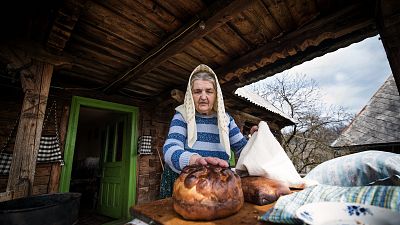 For Alex Robciuc a 33-year-old Romanian photographer, there is no better source of inspiration than his own home, Maramures.

“My native area is the fairy tale place which inspired me. The natural setting, cultural heritage, picturesque place, and beautifully preserved traditions offer material most photographers can only dream of.”

Maramures, he explains, has a perfect balance between the modern and the ancient; as well as a constant sense of change and permanency. It’s easy to lose yourself, and your sense of time, while you’re appreciating the mountain landscapes or the sleepy sound of working farmers which echoes through the landscape.

“Rural areas in Romania have the strength to exceed four dimensions. If you take a long walk, it’s easy to lose track of time. How is it possible for some things to stand still while others evolve around them?”

According to Alex, rural Romania has a strong ancestral character, a sort of magic aura, and a spirit he tries to capture in photography. Inspired by realist painters, he aims to evoke a sort of “unreal” actuality in his pictures, as if it was painted on a canvas.

“Maramures has something magical. I don't think there is a village or mountain top that doesn't intrigue. It provokes you to look, admire - and take photos.”

His photography journey started when he was given a camera as a child. This quickly became his favorite toy. He fell in love with the process where light and chemistry work together to produce images.

He now works as a freelance photographer in Romania. In 2019, he won a Sony World Photography Award in the National Awards category.

His work has been featured in several notable publications including National Geographic, Vogue, Der Spiegel, and Lonely Planet.

Alex believes that Romania still not considered a go-to destination by tourists, which partly explains why much of the landscape is still preserved in natural beauty. His images invite people to experience the beauty of Romania for themselves.

"We consider the beautiful things around us to be normal. For example, a green meadow, a carriage of farm animals, an old wooden church, people dressing in the ancestral clothes. For tourists, these sights are something new – or even something they thought as belonging to history,” he explains. “What is beautiful - and especially accessible - will always be interesting to people!”

Follow Euronews Travel to discover more travel photographers from around the world.

The magical Romanian villages known for their unique Gothic churches

What is life like for a female travel photographer in Turkey in 2020?

8 major European photo events to follow in the next months