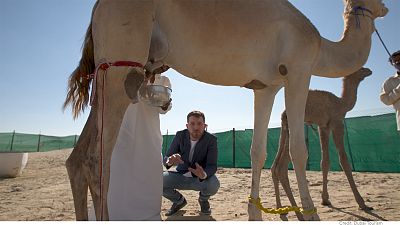 In this edition of Taste, we take a look at the increasing popularity of camel milk. It's has less fat, more vitamins and is easier to digest than cow's milk. Some studies show it can actually reduce blood sugar levels. And scientists say it's as close as you can get to human breast milk. Not surprisingly, it has now become a popular ingredient for desserts.

Martin Van Almsick is the man behind Al Nassma, the world’s first camel milk chocolate factory. He set up the business in 2008 and started distributing his products in Switzerland in 2011. It was only in 2013 that the EU allowed camel milk to be imported into the bloc.

Like all chocolate, camel milk chocolate starts with the cocoa bean. After roasting the bean, the cocoa nib is removed from the husk and placed in a conch - a mixing machine that promotes flavour through frictional heating.

Al Nassma uses only locally sourced camel milk which comes from the Camelicious camel farm across the road from the factory.

Van Almsick explains why only powdered milk is used in the chocolate-making process.

"Milk contains 90 per cent water and water doesn't go along well with the cocoa butter of the cocoa bean," he says. "Into the mix is added acacia, honey, sugar, bourbon vanilla and dollops of cocoa butter. We want to make this chocolate from top ingredients and vanilla is one of them, acacia honey another. But of course, the camel milk powder as well."

Al Nassma produces on average 300kg of chocolate per day which is exported to several countries all over the globe from San Diego to Sydney. It is available in such fine food establishments as Harrods or Selfridges in London or Julius Meinl am Graben in Vienna.

The company says there is now a growing market in east Asia where around 35% of their customers are based.