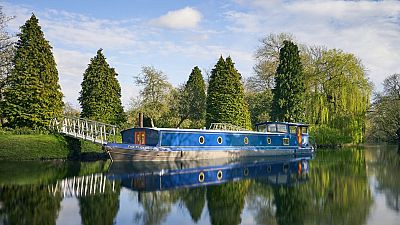 It’s Friday and I am on a train gently rolling through the British countryside on a 35-minute journey out of London Paddington in an attempt to flee the inescapable drear of rainy autumnal London for a relaxing mini-break. My destination is somewhere truly unique, a hotel built on an island with a fascinating history in the middle of the widest stretch of the Thames.

I am just making progress with the first chapters of my novel when the train pulls into Maidenhead station where a shuttle is waiting to whisk me through the Royal County of Berkshire to the beautiful village of Bray and the newly restored, historic beauty of Monkey Island Estate.

Rising from the rubble

Contrary to what many expect from its name, Monkey Island was christened for the 12th century monks who used the location as a fishing pond and not when Mad King George III was banished there with his pet monkey. To raise the land above the flood level, rubble from the Great Fire of London was dumped here creating a sizeable island that was then bought by the 3rd Duke of Marlborough. From then on, this small piece of land has lived a colourful life hosting everyone from Monks to the aforementioned Duke who claimed the exclusive patch as a home for his fishing resort. Architect Robert Morris’ Palladian follies, the fishing temple and pavilion, were built for the Duke and provide central elements of the hotel’s accommodation. It then became a riverside inn where all manner of illustrious visitors from late Victorian superstar Dame Nelly Melba to famous WWI poet Siegfried Sassoon came to enjoy the environs of this hidden paradise.

Even the reception for the estate is something a bit special. Approaching the boathouse on the shore of the River Thames to collect your room key before crossing a bridge to the main body of the hotel creates the feeling that you are embarking on a journey to somewhere far away from the encroaching September grey. After a welcome gin and tonic, a walk in the seven acres of grounds provides just enough interest for the island to feel like a different world in itself without being exhausting.

My room is in the temple building enveloped on all sides by soft, English country garden planting that shields the floor to ceiling windows from the rest of the estate. Even with the warmer weather coming to an end, both the formal and more relaxed parts of the grounds are still full of beautiful late summer colour. Walnut trees, under which a 1905 photograph of Edward VII was taken as he enjoyed afternoon tea, crown the north end of the island whilst the kitchen garden, from which ingredients for both the hotel spa and restaurant are drawn, is to the South. Monkey Island Estate has been looking to a cornish venture growing their own British tea for inspiration as they plan to add a tea house that will provide ingredients for their own fragrant tisanes.

A cruise along the Thames at Bray

As a gentle precursor to dinner, general manager, Lee Kelly, acts as guide for a sunset cruise along the Thames in one of the hotel’s chartered boats. Miraculously, the sun cuts through the earlier rain to provide a warm evening and golden sunset that is the perfect backdrop as he chats about Monkey Island’s surroundings over a glass of champagne. Bray on Thames is famous for its multiple Michelin-starred restaurants which offer incredible food if you fancy exploring the mainland in search of a culinary adventure. It is definitely a place for a foodie weekend away as the only village in the world with three restaurants deemed special enough for the prestigious accolade. With such fantastic luxurious food all around, Monkey Island provides the perfect base for an indulgent staycation mini-break. The boat trip continues through the lock and past The Waterside Inn, set up by the Roux brothers in the 1970s, towards Maidenhead with a bit of dream shopping for a new home among the many multi-million riverside properties in the area along the way.

The challenges of running Monkey Island Estate are definitely different from Kelly’s previous position at the Savoy. “The geese are a constant problem,” he says as they float innocently past us, “we are always having to pick up after them when they decide to invade the lawns” but this minor inconvenience is a small price to pay for the hotel’s idyllic setting. Newly refurbished rooms remain sympathetic to its Grade 1 listing with period features retained to help guests to absorb the history of their surroundings. It has taken a number of years to renew the glory of this beautiful hotel from the dereliction of its nineties neglect, but the outcome is evidently worth it.

Although the abundance of Michelin-starred establishments is an incredible draw, it is also worth checking out the brasserie on-site. Executive chef, Matthew Price, has created a menu comprised of British classics suited to the historic surrounding using ingredients sourced from the local area. As well as eggs laid by chickens on the island, the restaurant also uses salmon it smokes itself. Lee Kelly calls it “a bit of a learning process” explaining that at first, they were using too much heat for too short of a time which led to not particularly smoky, cooked salmon. It is clear from the quality of the final product and the tantalizing smell emanating from their smokehouse that they have definitely perfected the art.

The taster menu is a fantastic selection of seasonal fare but if you have a sweet tooth it is the sticky toffee pudding that will leave you enamoured of the restaurant's offerings. Throughout the day’s activities, there were whisperings of its deliciousness from many staff members and it doesn’t disappoint as the perfect sticky sweet end to a hearty meal on a crisp evening.

For an after dinner treat, a fire pit has been lit at one of the shepherd’s huts with marshmallows for toasting and a secret “three booze hot chocolate”. I am still unsure what three alcohols were in it but both the warmth of my autumnal drink and the crackling of the fire soon had me yawning. In the soothing quiet of the rural setting, the cosy queen-sized bed will have you sleeping like a baby as soon as your head hits the lavender-scented pillows.

Drifting off at the Floating Spa

After a luxuriously long breakfast of poached island eggs and smoked salmon, it is finally time to sample Monkey Island’s newest offering. The Floating Spa is a unique spa experience based on a deceptively large customized barge with enough space for three treatment rooms. Floating on the glassy water of the Thames, the perfect silence is a magnificent escape from the busy city, and I can already feel my stress dissipate as I sit in the waiting area and sip on a tonic concocted from botanicals grown in the surrounding garden.

One of the hotels signature treatments is “The Monk’s Elixir”, a holistic experience that starts with a sampling of three herbal tonics still brewed by monks around the world; chartreuse, D.O.M. Benedictine and Frangelico. The concept for such a different spa setting is once again born from the hotel’s intrinsic association with the history of the Thames. Taking inspiration from the Apothecaries’ Barge, moored in Chelsea in the 17th century to provide herbal remedies for citizens of the capital in search of wellness, The Floating Spa hopes to provide spiritually healing experiences for the guests of the hotel.

The experience feels healing as oils steeped with arnica, angelica and melisse, some of which have been sourced from the grounds, are used as part of a full body massage. Apart from the creak of the barge, it is so astonishingly quiet that it is difficult not to drift off. The comforting warmth of herbal heat packs, placed on the joints to help ease stiffness, only serves to push you further towards the deep relaxation of sleep.

The last thing on anyone’s mind as you sink into the massage bed is the sustainability of the products, but it is reassuring to know that, aside from its own oils, the spa uses products from organic brand Moss of the Isles and all-natural skincare company, ISUN. Even my usually dry skin is practically singing with delight and I can tell the massage has done my sore muscles a lot of good. After the treatment, there is some time to re-acclimatize to being vertical with an anti-inflammatory turmeric tea and energizing snack from the hotel kitchen. Also provided are some ‘prescription’ aromatherapy chocolates as a nod to the monks’ medicinal chocolate recipe which is rumoured to have been bought by Cadbury as it began its cocoa empire.

Some tea to finish

Before slipping back to London on a quiet afternoon train, there is just enough time for some afternoon tea. The selection of cakes is divine, the scones, in particular, are gorgeous and buttery with the unusual offering of orange curd to pair with the standard clotted cream. Tiny Victoria sponges and lemon meringue pies sit atop the tower of treats as well as the hotel’s signature orange and walnut brownie. A fragrant Earl Grey is the perfect accompaniment to the mountain of sweets and sandwiches with a light caffeine kick to pep you up mid-afternoon.

Nightly rates at Monkey Island Estate start from £275 per room per night with spa treatments an additional £85 per guest. Visit the hotel’s website here for additional information and bookings.

Germany staycation: domestic tourism on the rise in Schleswig-Holstein