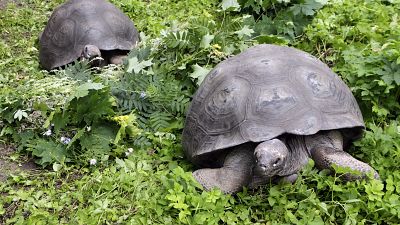 Conservationists are warning that climate change may threaten one of the world's longest living animals, the Aldabra giant tortoise.

These lumbering ancient creatures have walked Indian Ocean islands for millennia, some are thought to have lived to about 250-years-old, although most live between 80 and 120 years in the wild.

"It's definitely the size of the tortoise that amazes me, for a reptile it's pretty large and they're just so gentle creatures," says ranger of the Seychelles National Parks Authority, Demien Mougal.

"They'll walk around all day and then sleep during the day, it's just sometimes, it's really fun to just look at them and be like; 'Life must be easy being a tortoise.'"

But life for the Aldabra giant tortoise hasn't been so "easy" of late.

Their endemic home, the UNESCO World Heritage-listed Aldabra Atoll, is now already feeling the effects of climate change, from coral bleaching to coastal erosion. As a result of global warming, the Indian Ocean's waves may envelop the isolated low-lying atoll one day, taking with it over 100,000 giant tortoises, the largest population in the world. However, the local conservationists found a way to ensure the species' future.

_Click on the video above to learn more about the Aldabra giant tortoises and how they can be saved. _