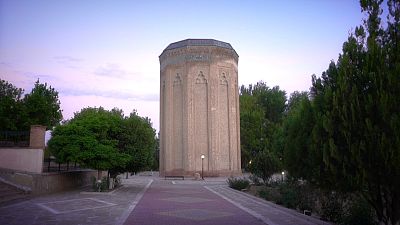 This week, in Postcards from Azerbaijan, it is time to look up at an impressive structure.

The Momine Khatun Mausoleum dominates the skyline of the city of Nakhchivan.

It was built in 1186 in honour of Momine Khatun who played an important role in local political life.

"Today 26 metres high, the mausoleum was originally 9 metres higher, crowned with a dome shaped as a tent,” explained Postcards reporter Galina Polonskaya, on her visit to the picturesque region.

Momine Khatun gave wise advice to her husband, the powerful local ruler Shamsaddin Eldaniz. After her death, he ordered the construction of the monument.

But he, too, soon passed away and it was their son who made sure that the construction was finished. In total, it took 11 years.

"Momine Khatun was a very wise woman and she advised in the management of the state and enjoyed great authority in state apparatus,” historian Fahraddin Safarli told us.

One of the inscriptions on the mausoleum says: “We go, and only wind is left. We pass away, and only a work remains”.