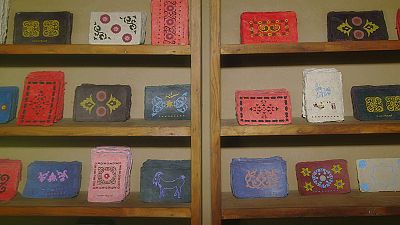 This week in Postcards, the lost art of papermaking in Samarkand.

It is in a small factory known as Meros that a centuries-old tradition is being revived.

The paper made here was considered to be among the finest in the world, and today the Mukhtarov brothers are producing the same products by hand.

Kneeling beside a small canal full of branches, Euronews’ Seamus Kearney reported: “And this is where it all begins, branches from mulberry trees soaked for 10 days.

“And then it’s the next step: the bark stripped off by hand, ready for the two-week process of being turned into paper.”

Visitors get the chance to see every delicate stage, including the pressing and polishing of the paper.

Samarkand guide Romiz Ahrorov told Postcards: “Today we still use an ancient grinding mechanism, which has been used for more than 2,000 years, to grind the inner bark into a mushy substance.”

And at the end of the fascinating process are top quality products, able to withstand the passage of time over hundreds of years.