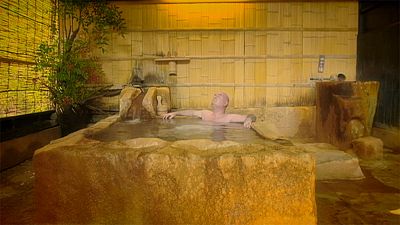 This week in Postcards from Japan we are in Kagoshima, where there is pleasure to be found in the geothermal activity.

The onsen contains elements such as magnesium, calcium and iron, and I really believe there's a diverse range of effects that treat the body

We paid a visit to a hot springs resort, known here as an onsen, which is a popular way to unwind.

The Gajoen establishment is just one of many in the region.

Euronews’ Seamus Kearney reported: “And to get into the mood you need to quickly leave behind your normal clothes and get into a kimono.”

Absolutely everything is taken care of by the staff; all you have to do is relax and make the most of the natural surroundings.

From the Onsen bath, Seamus added: “And this is the key moment in the onsen, taking the time to soak in the piping hot thermal bath.”

Etsuko Tajima, the landlady of the Gajoen resort, told Postcards: “The onsen contains elements such as magnesium, calcium and iron, and I really believe there’s a diverse range of effects that treat the body.”

And after enjoying the farm-like atmosphere, meals with fresh local produce are brought to your room.

Then, at the end of the day, staff prepare your futon to ensure a good night’s sleep.