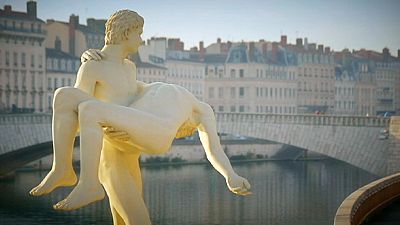 This week in Postcards from Lyon, the beautification of the space beside the French city’s two major rivers.

One of the projects is a long promenade of nature and culture along the Saône river.

Euronews’ Seamus Kearney reported: “There’s a variety of artwork along the walkway, from African masks … and unusual benches that appear to have kept growing and growing … to one of the most popular, a statue in the city centre.”

The statue looks like a man saving another from drowning, but actually he is holding himself.

And the location of the work, called “The weight of Oneself”, is not by chance.

Marion Réguillon, a Lyon guide, told Postcards: “This statue symbolises civic and individual responsibility, both of which are debated in the main courthouse, which is just in front of the statue. It’s a nice connection.”

The Berlin-based artists who made the statue are Danish-born Michael Elmgreen and Norwegian-born Ingar Dragset.

Teams of designers and 13 international artists came together to make the Saône riverbank a more attractive place.

The African masks are by the Cameroon-born artist Pascale Marthine Tayou, who lives in Belgium.

The benches are the work of an Argentinian artist living in Paris, Pablo Reinoso.

The French city reclaiming its riverbanks for the people