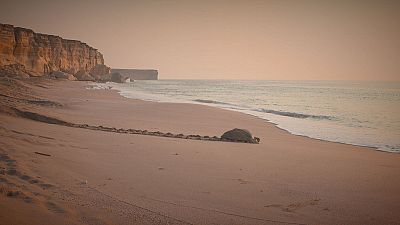 In this edition of “Oman Life” we explore the country’s stunning coastline and discover the rich sea life including the endangered green turtle.

Our journey begins close to the capital Muscat on one of the country’s traditional boats, wooden vessels known as “dhows”. It takes us to the Bandar Khayran nature reserve.

This large mangrove-fringed lagoon with its small islands and sheltered bays is a haven for many animals.

The head of fisheries research Oman, Lubna Hamoud al Kharusi described the unique eco-system: “Bandar Khayran is rich in terms of biodiversity in the sea and on land. The diversity of the reserve is important: a variety of birds, coral reefs, fish and a wide variety of mangroves. It’s totally unique.”

The treasures are hidden beneath the surface. The warm water and the coral reefs draw schools of tropical fish into the bay. Almost 200 types of different fish and a variety of 45 coral reefs can be found in this one reserve.

We next headed to the eastern-most region of the Arabian Peninsula to the coastal city of Sur. In the past, it played a crucial role in trading with India, Africa and South East Asia.

Sur is also famous for its dhow shipyards. These vessels have been sailing the Indian Ocean for centuries, carrying precious goods.

They are built without any drawings, everything comes from the mind of the master builder, one of whom is Khalil al-Araimi: “We first install the central pole which becomes the backbone of the boat,” he said. “Then we add the ends, ribs and roof. As soon as the boat is ready, it is sent to the sea.”

Al-Araimi comes from a family of shipbuilders who have preserved the traditional skills. It takes up to eight months to make one wooden vessel out of teak. To this day everything is done by hand.

“We put cotton around the screw. It is first soaked in oil then planted into the timber. Then we add an insulating material called Lami. It stops the water from seeping through so the screw won’t rust,” added Khalil.

After travelling thousands of kilometres through the ocean the green turtles come to lay their eggs on this beach.

Nasser Al Zadjali has been working here for seven years and observing their behaviour.

“The turtles usually arrive during high tide because of their weight, It can be fro; 80 to over 150 kilograms,” he said.

“After that it starts digging deeper and lays the eggs. Then it starts using the front flippers to throw the sand behind and slowly moving forward.”

After a 50-day incubation period the baby turtles hatch and begin the most perilous journey of their lives.

They’re on the menu for all kinds of predators from foxes to birds and even crabs.

Only about one in a thousand will survive to adulthood, when it will return after 25 years to lay eggs of its own.

Traveller's diary: Oman and the sea