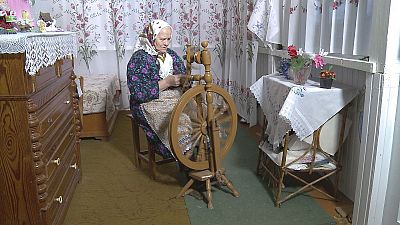 In 1834 members of the Molokan religious community set up home in a rural area of Azerbaijan.Families settled there after being exiled from Russia for breaking away from the rules of the Russian Orthodox Church. Their descendants still speak Russian and keep up Russian traditions.

Ivanovka village is well known in Azerbaijan. Locals speak Azeri but their mother tongue is Russian. Every child knows their history. Catherine the Great exiled them from Russia and after wandering for many years they finally found what they call their ‘heaven on Earth’.

“They did not accept the idea of icons; they only prayed directly to God,” says Matvei Ermolov, Ivanovka, a village elder. “So Catherine ordered the Molokan faithful to be exiled from Russia. That’s how it started; they moved around a lot.”

In their traditional ‘praying house’ there are no icons, no candles, no decoration and no priests. Euronews was granted rare permission to film their prayers.

With the elders in the centre, the group form what is called a ‘ chancel’. Others must keep their distance. The elders look after the spiritual life of the village, trying to convince couples not do divorce, for example, and young people not to drink alcohol.

“The elders sit at the top. If there’s a question that needs do be resolved we, the men, stay after the ceremony and think about how to solve it,” says Emolov, a venerable 86-year-old.

Almost every house in Ivanovka has a traditional Russian stove. It is not used every day – just on special occasions. When we visit it is villager Valentina Serebryannikova’s birthday and she is cooking the most famous Malokan dish, ‘lapsha,’ which means noodles.

“Easter, marriage or even a funeral – our noodles are a must for the table. Without noodles it’s not a real feast,” she says.

Ivanovka is the only village in Azerbaijan that still works as a collective farm (kolkhoz). They got special permission from the authorities to maintain what was once one of the richest such enterprises in the USSR. Despite economic hardship the residents cannot imagine privatising the land..

Ivan Novoseltsev, worked on the farm his whole life. After retiring he became a beekeeper. He says the flowers in Ivanovka are unique and that is why his honey is tasty and good for one’s health.

“All of these lands you see belong to Ivanovka. When our forefathers came here there were trees everywhere and they uprooted the with their bare hands. What we see now is the fruit of the labour of our fathers and grandfathers,” Ivan affirms.

Ivanovka is open to new arrivals. John Howarth is from the UK. He came here for a one-day visit and decided to stay and now he and his wife Tatiana run a guest house in the village. Their dishes are made from homegrown vegetables; duck and eggs come from the neighbours.

“We often get people here coming on the Silk Way route, coming from the Europe or coming from the East. And they come through Ivanovka and they all stop at our house so we get all the nationalities here,” John says.

John’s neighbours, Anastasia and Vasili Kozlotsev, are also welcoming and were happy to show us around.Their home and way of life is a window onto the past, when the first Molokans arrived in Ivanovka.

Anastasia shows us her ‘bridal trunk’: “We got married in 1955. It contains my dowry. I was 17 when I made the embroidery and after I became a wife.”

They have lived happily in the village ever since, praying before meals, working on the farm and keeping alive their Molokan tradition. After recently celebrating Anastasia and Vasili their 58th anniversary they hope Ivanovka will always stay as it is.