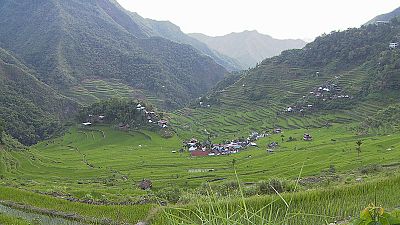 The Philippines have a rich and unique history. In the final edition of our four-part series ‘Philippine Life’, we take the heritage trail and explore three UNESCO protected sites; the former Spanish colonial town of Vigan, the baroque church of Paoay, and the breathtaking rice terraces of Banaue.

Filipinos proudly refer to the rice terraces as the ‘Eighth Wonder of the World’, whilst the Spanish thought they were steps to heaven. Located in the remote mountainous region in the north of the country, one of the rice terraces’ most beautiful sites is the village of Batad. Here, paddy fields nestle around the town like an amphitheater. They were built 2000 years ago by the mountain tribe Ifugao, and the traditional methods of producing rice have been handed down from one generation to the next, ever since.

As village elders, Rosalia Buya and Tessie Mannod, explain: “Every morning we have the same routine. Before we leave to work in the rice field we have to prepare the rice, we have to pound it, so that in the afternoon when we will go home the rice is already prepared to be cooked for dinner.”

Rosalia and Tessie have spent their whole lives in Batad. Each of them has seven children who help with the daily grind. As long as they can remember, tasks between men and woman have been strictly divided: “The work between men and woman is separated. The women are the ones preparing and cleaning the paddies and the walls of the rice terraces. We also plant the rice. The men are the ones who repair the stonewalls and put the soil on the paddies.”

The work can be physically arduous, so some younger members of the community try their luck in the city instead. Older inhabitants here hope that their heritage will still be preserved in their absence. As resident Webber Chuccar explains: “We cannot abandon these rice fields. We need to preserve them because they have a historical, sentimental value for us.”

Sacred traditions are equally important to the Ifugao, and Bulol, the rice god, plays a central role in ceremonial proceedings. For Chuccar, they are a way of safeguarding their produce: “During harvest time we perform rituals because we believe that the rice god is the one who is protecting the rice that has been planted in the rice field…and we don’t want enemies, like birds and rats, to destroy it.”

North from Batad is the town of Vigan; a UNESCO world heritage site, considered to be the best-preserved example of a Spanish colonial town in Asia. Far from being a museum, people here still live, and work, in the centuries-old ancestral houses. As shopkeeper, Eva Marie S. Medina, explains: “Vigan is a fusion of the East and the West, so you get best of both worlds. We convinced the home owners to open up their ground floors so that it would bring back it’s old status of being a shop-house. Little by little this has brought back the life in Vigan.”

Just 60 kilometres further north from Vigan is the church of San Agustín, in Paoay. Renown for being an outstanding example of the ‘Earthquake Baroque’ style of architecture, its coral stones walls have survived more than 50 earthquakes in the last 300 years – thanks to the massive buttresses along it’s sides. For researcher Bernard Guerrero, it is a perfect example of Filipino ingenuity: “The Filipino builders here never had any first impression, or first experience, as for how churches looked like in Europe. So they basically created baroque churches based on their own interpretations. You can see the love that they have, to build a structure that they hoped would last forever.”

From the bustling mega city of Manila, to the vacation island of Boracay, the underwater paradise of Luzon and the country’s rich cultural heritage sites – our trip is coming to an end. We hope you enjoyed our ‘Philippine Life’ adventure. If you would like to access any of our reports again, check out our website at www.euronews.com/life