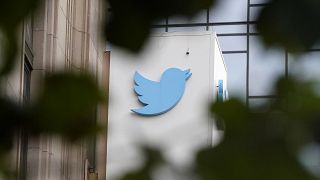 Twitter has auctioned off hundreds of items at its San Francisco headquarters this week.   -   Copyright  Jeff Chiu/AP
By Giulia Carbonaro  & Reuters  •  Updated: 19/01/2023

Twitter’s tale of woe is far from over, even as the company has somewhat retreated from the headlines in recent weeks.

A lot has changed for the social media platform since Elon Musk entered its San Francisco headquarters carrying a sink (and tweeting: “let that sink in!”). More than half of Twitter’s 7,500 employees have been fired. The remaining workers no longer enjoy perks like free meals.

Virtually anyone willing to pay for it can now be granted the once-coveted blue tick, a sign of authority and legitimacy. The once-banned accounts of Donald Trump and Andrew Tate, among others, have been reinstated. Several advertisers left the platform, leaving Twitter to deal with a sudden massive drop in revenues.

But as Musk’s leadership continues – despite the billionaire pledging to (eventually) resign from the role of CEO after being voted down by Twitter users – so do his attempts at overhauling the social media platform and slashing costs.

A statue of the company’s iconic logo, the blue bird, which stood at Twitter’s San Francisco headquarters was sold for $100,000 (€92,500) on Wednesday, as part of an auction including hundreds of items belonging to the struggling social media platform.

The statue was the most expensive item sold – certainly not a bargain.

A list of the items auctioned off obtained by the BBC shows that Twitter also sold a conference room table, a high-end espresso machine, conference call speakerphones and even chairs.

The list paints a picture of a company struggling to keep afloat and, as Musk warned last year, could face bankruptcy.

Twitter is now ready to lay off dozens more employees in the coming weeks, Business Insider reports, saying Twitter's headcount could soon fall under 2,000 people, its lowest level in over a decade.

The layoffs have not been confirmed by either Twitter or Musk, who had recently promised employees that he was done with job cuts.

Meanwhile, the company is still trying to attract new users – paying ones in particular.

Twitter has just launched a new plan for its Twitter Blue subscribers using Android priced at $11 (€10.2) a month, the same amount paid by iOs subscribers.