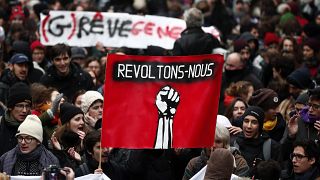 A nationwide strike is taking place in France on Thursday in response to plans by President Emmanuel Macron’s government to reform the pension system and raise the retirement age. Strikes may continue beyond January 19 as France’s largest trade union has described Thursday as only a starting point.

Strikes have been happening in the UK, too. Nurses went on strike in England in December 2022 for the first time in 106 years. Rail workers have been on strike in recent weeks, and teachers and health workers are planning to strike in February.

Strikes are a significant part of the culture of working life in Europe. People in several EU member states including Spain and Germany went on strike recently, primarily asking for better pay and working conditions.

But which countries have the most strikes in Europe? Is industrial action more common in some countries than others? How has the number of working days lost to strikes changed over the last decades?

Industrial action is typically measured by “days not worked” or “working days lost” due to strikes or lockouts. The number of days not worked due to such action varies highly from year to year. Thus, trends over time are more meaningful than simple comparisons of annual data.

According to a dataset prepared by the European Trade Union Institute (ETUI), the countries going on strike the most have seen slight changes in ranking over the last 20 years.

Between 2000 and 2009, the annual average of days not worked due to strikes per 1,000 employees was the highest in Spain, where an average 153 working days were lost. This was followed by France with 127 days.

Denmark (105 days) ranked third with an annual average of more than 100 working days lost. Belgium and Finland followed with 70 days each.

In the UK, only 28 working days a year were lost on average in 2000-2009 due to strikes. In Germany, it was only 13 days, while it was eight days in the Netherlands. Several countries such as Switzerland and Poland saw fewer than 10 days lost.

Between 2010 and 2019, Cyprus lost the most working days due to strikes at an annual average of 275 days. France followed the island country in this time period with 128 lost days.

All other countries for which data were available saw fewer than 100 days not worked due to strikes. More than 15 countries had fewer than 20 lost days in this period, with 18 days in the UK and 17 days in Germany.

The period of 2020-2021 offers data for only two years, with no data for some countries. France (79 days) had the highest annual average lost days due to strikes, followed by Belgium (57 days), Norway (50 days), and Denmark and Finland (49 days each).

Lost days in France, UK, Germany, and Spain due to strikes

Looking closely at the last two decades, ETUI data shows how the number of days not worked due to strikes varied in France, Germany, the UK, and Spain from year to year.

The UK and Germany had relatively fewer lost days compared to France and Spain in the last two decades. The highest number of lost days in a year was 57 days in both countries in this period.

Days of work lost due to strikes are declining

As the above chart indicates for the selected four countries, working days lost due to strikes are declining.

OECD data comparing the 1990s and 2008-2018 makes this trend very clear. The average numbers of working days lost due to strikes per 1,000 employees fell remarkably across these two periods in many countries.

Spain and Turkey saw the highest declines in lost working days. In Spain, it decreased from 309 days to 76 days. In Turkey, there was a sharper fall from 223 days to 10 days.

Denmark saw a decline from 169 days to 105 days, which suggests that a culture of striking is still strong in this country.

Belgium is an exception to this trend. Working days lost due to strikes increased from 31 days to 98 days in this period.

Strikes drop in the UK

According to the Office for National Statistics, in 2017 the number of workers who went on strike in the UK fell to its lowest level since the 1890s.

Right to strike and collective bargaining

The right to strike is essential in demanding better pay and working conditions. Collective bargaining makes workers stronger in negotiations with employers.

The UN’s International Labour Organization (ILO) has data on countries' collective bargaining coverage rates - the share of employees whose pay and working conditions are covered by one or more collective agreement.

European countries generally have the highest coverage rates in the world.

In 2020 or the latest available year, the collective bargaining coverage rate was higher than 90 per cent in five EU member states. Italy (99 per cent) ranked first, followed by France and Austria (both 98 per cent). This figure was 52 per cent in Germany and 27 per cent in the UK.

Turkey and Lithuania (both 7 per cent) have the lowest collective bargaining coverage rates in Europe.

As the OECD points out, international comparability of data on strikes is affected by differences in definitions and measurements. The ETUI, ILO, and OECD all provide comprehensive information about how their data is collected and what it reflects.

The countries where population is declining