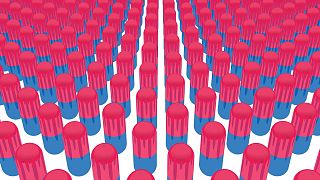 Global consumption of antidepressant drugs (AD) has increased dramatically in the last two decades, with Europeans the largest consumers.

Use of antidepressants increased by nearly two and a half times from 2000 to 2020 in 18 European countries, according to Organization for Economic Cooperation and Development (OECD) data.

OECD data also shows a dramatic increase in anxiety and depression during the COVID‑19 pandemic. Do the happiest countries use fewer AD drugs? How do researchers explain the sharp rise in the consumption of antidepressants?

OECD datasets demonstrates the defined daily dose (DDD) consumption of “N06A-Antidepressants”. This group “comprises preparations used in the treatment of endogenous and exogenous depressions,” according to the World Health Organisation (WHO).

But this overall average conceals very different starting points for antidepressant use in 2000 in certain countries, ranging from 6.4 DDD in Estonia to 70.5 DDD in Iceland.

The Czech Republic recorded the highest increase with 577 per cent while it only rose by 38 per cent in France making it the lowest change in these countries between 2000 and 2020, albeit from a relatively high level.

A closer look at five selected countries –France, Germany, Portugal, Spain, and Sweden - over 20 years demonstrates how the use of antidepressant pharmaceuticals varies.

While the increase is very low in France, especially in the last 15 years, it rocketed in Portugal in the last two decades.

The bar race chart also shows how antidepressant consumption has increased year-on-year in European countries. In 14 out of 18 countries, AD drug use more than doubled.

Which countries have the highest antidepressant consumption?

Looking at changes in the last decade, we have data for 24 European countries.

In 2020, the average use across these 24 countries was 68 DDD. The largest three countries by population namely Turkey (49 DDD), France (55 DDD) and Germany (62 DDD) all recorded below average use.

Any correlation between happiness and the use of antidepressants?

The short answer is no. The data on European countries does not suggest that the happier people are the less they consume antidepressants.

Iceland, which was the second happiest country in the world in 2020 according the World Happiness Report, has the highest antidepressant consumption in Europe.

Sweden, which ranked sixth in the Happiness Report, has the fourth highest use of antidepressants with 105 DDD.

Finnish people, who were the happiest nation according to the report, used 82 DDD antidepressants which placed Finland seventh out of 24 countries.

Latvia which has the lowest consumption with 20 daily doses ranked 34th in the World Happiness Report. Hungary which follows Latvia with 30 DDD was on the 43th place in the happiness list.

Antidepressant consumption decreased only in Denmark in last 10 years

The consumption of AD drugs increased by 36.5 per cent between 2010 and 2020 in 24 European countries with average daily use up from 49.8 DDD to 68 DDD. Denmark is the only country to see a decrease in the use of antidepressants in the last decade with a 4 percent decline.

Estonia recorded the highest increase with 133 per cent while consumption only increased by 2 per cent in France.

It doubled in the UK, and increased by 50 per cent in Turkey. The change was under 25 per cent in 10 countries.

What about spending on antidepressant drugs?

The cost of antidepressant drug spending is a burden on citizens and their countries.

The ratio of spending on antidepressants to total pharmaceutical sales suggests that it is a significant cost in some countries.

In 2020, antidepressant drugs accounted for 4 per cent of pharmaceutical sales in Portugal, compared to 2.7 per cent in Spain, 2.2 per cent in Austria, 1.9 per cent in Turkey and 1.4 per cent in Germany.

The prevalence of chronic depression in Europe

There is no official comparable data on the share of people reported having chronic depression or consulting a psychologist, psychotherapist or psychiatrist.

However, survey results released by Eurostat provide some insights. In 2019 Eurostat found that 7.2 per cent of EU citizens reported having chronic depression which was only a tiny increase compared with 2014 (+0.3 percentage points).

In 2019, among EU countries Portugal (12.2 per cent) had the highest share of the population reporting chronic depression, followed by Sweden (11.7 per cent), Germany and Croatia (both 11.6 per cent).

The share of people reporting chronic depression was lowest in Romania (1.0 per cent), Bulgaria (2.7 per cent) and Malta (3.5 per cent).

It is interesting that the top two countries Iceland (15.6 per cent) and Portugal (12.2 per cent) in reporting chronic depression also had the highest antidepressant consumption with 153 DDD and 131 DDD in 2020 respectively.

The impact of COVID on mental health

Recent surveys released by the OECD found that mental health has deteriorated significantly since the start of the COVID‑19 pandemic.

From March 2020 onwards, the prevalence of anxiety and depression increased in 15 selected OECD countries, including several European ones.

The prevalence of anxiety in early 2020 was double or more than double that observed in previous years in Belgium, France, Italy, Mexico, New Zealand, the UK and the US.

The prevalence of depression in early 2020 was also double or greater than double that observed in previous years in Mexico, Australia, Belgium, Canada, France, the Czech Republic, Mexico, Sweden, the UK and the US.

However, since the survey methods differ between studies, it is not possible to offer any robust cross-country comparisons.

Did antidepressant consumption increase during the COVID?

While the prevalence of anxiety and depression rose significantly during the COVID-19 pandemic, did the consumption of antidepressant drugs also increase?

There is an increase of 10 per cent or more in consumption between 2019 and 2021 in the 14 OECD countries for which data is available. For example, use increased by 22 per cent in Latvia in these two years but only 1 per cent in Hungary.

However, this is against a background of a steady trend in the increase of antidepressants consumption over the last 20 years. Therefore, more research is needed to understand any possible impact from the pandemic on these recent increases.

Why the antidepressant consumption increase?

There are a number of potential explanations for this rise in the last two decades.

Researchers who studied the influences on antidepressant prescribing trends in the UK between 1995 and 2011, suggested that the increase can be attributed to the improved recognition of depression, availability of new AD drugs, changes in patient/GP attitudes, availability of therapies, evolving clinical guidelines, and a broadening of the range of indications treated with ADs.