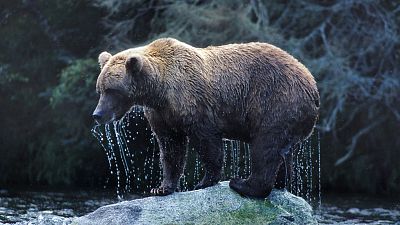 Just before hibernation season, brown bears eat a lot – as much as 20,000 daily calories, enough to put on around four kilos each day. And then they barely move, for months.

This is part of bears’ adaptive strategies to survive long winters without food.

If we humans did the same, we would gain dangerous amounts of weight, and then we would probably develop diabetes.

But the remarkable metabolism of hibernating bears avoids that, and scientists are exploring what we can learn from them to improve our own health.

"Many of us are absolutely fascinated by how bears are able to gain so much weight during the year and then go into hibernation and use all the energy stored, and then emerge from hibernation active and with no negative consequences of this dramatic weight gain and loss throughout every year," Professor Joanna L. Kelley, one of the study researchers from Washington State University, told Euronews Next.

One of the interesting things about bears is that during hibernation, they become insulin-resistant, and during the active season, they're insulin-sensitive, she explained.

If we humans are on bed rest, even for a very short amount of time, this can have major negative consequences for us. But bears are very cosily lying around for many months without major muscle atrophy.

"That means that every year, they have reversible insulin resistance," she said, adding that understanding this unique phenomenon could hold the key to treating insulin resistance and ultimately diabetes in humans.

"We thought, wow, if we could figure out how bears are able to do this naturally every year with no negative consequences, then maybe that will give us some information on how to potentially develop new therapeutics for humans: let's leverage the incredible natural biology and learn about that in bears. And so that's exactly what we've done," she said.

Along with a group of scientists, Professor Kelley has identified eight key proteins – also found in people – that help bears control their insulin levels.

"They are known proteins, they're shared between bears and humans, and I think that a really important point is these are not unique proteins to bears, which means that they're much more likely to be able to be used as therapeutics," she said.

What is insulin and how does it work?

Insulin is a hormone that regulates the concentration of glucose – sugar – in the blood, and it does that, for example, by sending signals to the muscles, the liver and fat cells to absorb the sugar.

If a muscle, for example, is insulin-resistant, it will not be able to absorb the sugar and turn it into energy.

The thing is, if too much sugar enters the body, our cells stop responding to the insulin, and they become insulin-resistant, leading to excess sugar in our blood. This is a leading cause of type 2 diabetes, a disease that can lead to heart attacks, strokes and blindness.

But scientists have discovered that even when brown bears gorge themselves on food, insulin resistance only kicks in afterwards, during hibernation, and not during their preparation, allowing them to remain free of diabetes.

"We haven't yet looked at metabolites, which may also play a very important role," said Kelley, adding that is more complicated than a simple on-off switch.

Her team’s study focused on the mid-active season and mid-hibernation, and it did not cover transitional points, such as now when the days are getting shorter and colder.

"I'm really curious about what's happening with these proteins during those transitional periods, which we haven't looked at; those transitional points when all of these signals are telling us, and bears, hey, stock up as much energy resources as you can before hibernation," she said.

"Those transition periods are going to tell us so much about how that process is happening".

Kelley has been studying hibernation in a variety of ways at the WSU Bear Centre.

Her team’s findings, published in iScience, also shed a light on the unique phenomenon that allows bears to stay very inactive for very long periods of time, and yet have very little muscle atrophy afterwards.

"If we humans are on bed rest, even for a very short amount of time, this can have major negative consequences for us. But bears are very cosily lying around for many months without major muscle atrophy".

The researchers attribute this to the fact that not all tissues in bears become insulin-resistant. Muscle seems to be insulin-sensitive throughout the year, while fat becomes insulin-resistant during hibernation.

The bear’s whole insulin-management phenomenon gives scientists a unique opportunity to better understand the disease and perhaps ultimately figure out how to break insulin resistance in humans.

"We are very interested in how this relates to humans. And the truth is that all of it relates to us, right? No matter what kind of organism we're looking at or what ecosystem or anything, we're all connected," she said.

This story was originally featured in the Good News roundup, Euronews’ weekly digest about what is going well around the world.